WHERE ARE YOU TRAVELING?

Get country overviews, detailed information including providers, recent alerts, and more for the countries you are visiting

(CNN)Hurricane Lane is poised to give Hawaii an unusually major encounter with a major cyclone -- and could batter the Big Island with rain and tropical storm force winds as early as Wednesday night.

The Category 4 storm's dangerous center could make landfall this week, but even if it doesn't, it should draw close to the islands Thursday through Saturday, bringing destructive winds and as many as 20 inches of rain onshore, forecasters said.
The state is bracing for a powerful punch: The governor has declared an emergency, and all public and charter schools on the Big Island and Maui County are closed until further notice.
People have been flocking to stores for supplies.
"(I'm) filling up my bathtub with some water, hoping to board up my main windows in time," a shopper on the Big Island, Shana Bartolome, told CNN affiliate KHON on Tuesday. 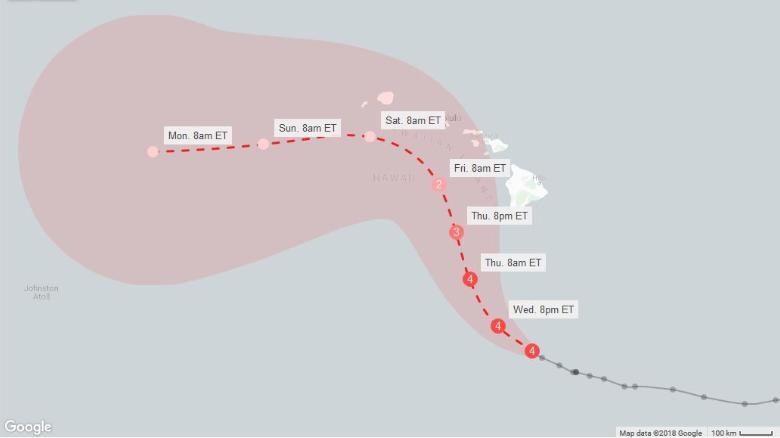 This forecast cone, created 11 a.m. ET Wednesday (5 a.m. in Hawaii), shows the probable range of Hurricane Lane's center for five days.
The storm was in the Pacific about 305 miles south of the Big Island town of Kailua-Kona early Wednesday, with maximum sustained winds of 155 mph.
Lane is expected to weaken slowly through Friday, but it still is forecast "to remain a dangerous hurricane as it draws closer to the Hawaiian Islands," the National Weather Service's Central Pacific Hurricane Center says.
Track the storm here
A hurricane warning is in effect for Hawaii and Maui counties -- meaning hurricane conditions are expected there.
A hurricane watch has been issued for Oahu and Kauai. The watch indicates hurricane conditions are possible and that winds of at least 39 mph are anticipated in the next two days.
American Airlines and Hawaiian Airlines issued travel advisories to customers flying to or from Hawaii. Both are waiving reservation change fees as the hurricane approaches.

Tropical-storm-force winds -- 39-73 mph -- and rain could arrive at the Big Island and Maui County late Wednesday and early Thursday, and at the other islands Thursday or Friday.
Hurricane winds (74 mph and higher) could hit the Big Island and Maui County on Thursday.
In addition to strong winds, the primary threats will be rough surf, coastal erosion and heavy rainfall, even if the center of the storm does not move directly over the islands.
Through Saturday, 10-15 inches of rain are generally expected, with isolated amounts greater than 20 inches, the Central Pacific Hurricane Center said.
The downpours could lead to landslides and flooding.

Hurricane Lane is a rare threat for Hawaii

Hurricanes rarely make landfall in Hawaii, as the Central Pacific does not see as many storms as the Atlantic or Eastern Pacific, and the Hawaiian Islands present a small target in the vast Pacific Ocean.
Only two hurricanes and two tropical storms have made landfall in Hawaii since 1959:
• Hurricane Dot, in 1959
• Hurricane Iniki, in 1992
• Tropical Storm Iselle, in 2014
• Tropical Storm Darby, in 2016
Even close calls are somewhat rare, with Hawaii getting a named storm within 60 miles of its coastline about once every four years on average.
Lane represented another kind of rarity: It was a Category 5 storm late Tuesday before weakening Wednesday morning.
As such, this was only the second time in recorded history that a Category 5 hurricane came within 350 miles of the state -- the first one being Hurricane John in 1994 -- the National Weather Service said.
Hawaii has been experiencing a volcanic eruption for much of the summer. Mount Kilauea began producing lava flows in early May and portions of the southeastern coastline of the Big Island have been transformed by the lava flows that covered over 13 square miles (35 square kilometers).
Fortunately, the eruptive activity of Kilauea has "paused," with no new lava flows since August 9, according to the Hawaiian Volcano Observatory.
Since there is not much lava reaching the ocean anymore, the hurricane shouldn't have too much of an impact on the volcano region, according to Denison University Geophysicist Erik Klemetti.

CNN's Keith Allen and Joe Sutton contributed to this report.

© 2006-2021 Seven Corners Inc.+303 Congressional Blvd., Carmel, IN 46032+800-335-0611
Seven Corners is one of the industry's most experienced travel health insurance providers. The company serves leisure, student, business, government and missionary/volunteer travelers. It offers an extensive selection of international medical and travel insurance policies to U.S. citizens traveling overseas, or foreign nationals visiting the United States. Seven Corners has thousands of policy holders and a worldwide network of over 30,000 agents. The company created and maintains the industry's most comprehensive network of international health care providers that includes thousands of doctors, pharmacies and hospitals around the globe. Seven Corners is a member of the United States Travel Insurance Association; is GSA certified and is currently pursuing a SAS 70 Type II compliant designation. In addition to travel medical insurance, Seven Corners also offers health care administration to the government sector. The company is privately held and headquartered just north of Indianapolis in Carmel, IN.